Who created the first American Flag?

The short answer is that no one truly knows.

The first American Flag from 1776 (or 1777) is often referred to as the “Betsy Ross Flag.” Legend has it that Betsy Ross stitched together a design that George Washington sketched at his request. Ross’ grandson, William J. Canby, brought this theory to the Historical Society of Pennsylvania in a paper in 1870. However, there is no documented evidence that proves, or disproves, Canby’s claim. How many times has the American Flag been modified?

The American Flag has been modified 26 times!  On June 14th 1777, the Second Continental Congress adopted the first official guidelines for the national flag: “Resolved, That the flag of the thirteen United States be thirteen stripes, alternate red and white; that the union be thirteen stars, white in a blue field, representing a new constellation.” Within the United States, citizens celebrate Flag Day on June 14th because of this. It is unclear whether the “Betsy Ross Flag” was created prior to this act as legend has it, or if it was created afterwards.

In 1795,  the Second Continental Congress established a new 15-star, 15-stripe design, after Vermont and Kentucky became states. Known as the Star-Spangled Banner, this was the flag that inspired the Francis Scott Key song by the same name that became the National Anthem of the United States. 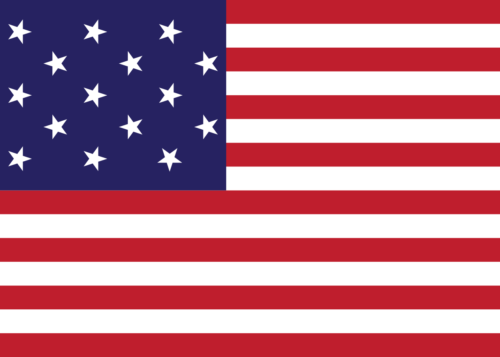 In 1818, the American Flag went back to thirteen alternating stripes. The 1818 Flag Act set forth that there be 13 alternating red and white stripes to represent the 13 original colonies, and one star for every state.

The remaining alterations to the flag were to add stars in the upper left corner as more states were added. The U.S. Government adopted the current 50-star version in 1960 and it has not changed since.

Why is the American Flag called “Old Glory?”

Old Glory was a nickname given to a 10’ x 17’ American Flag by William Driver, a sea captain from Massachusetts. Driver was the owner of the flag which has said to have survived many attempts to deface it during the Civil War.

Driver was a master mariner, sailing his own ship at the age of 21. In his 20-year career as a merchant seaman, Driver sailed to China, India, and Gibraltar. Driver would later move from Massachusetts to Nashville, Tennessee where Confederate soldiers tried confiscate his American Flag. However, Driver consistently resisted, even hiding his flag with his neighbors to prevent soldiers from taking it. Regarding his 10’ x 17’ American Flag, Driver wrote, “It has ever been my staunch companion and protection. Savages and heathens, lowly and oppressed, hailed and welcomed it at the far end of the wide world. Then, why should it not be called Old Glory?” Driver was a respected unionist and others noticed his devotion to protect the flag, causing to the nickname “Old Glory” to stick.

Flying your own American Flag can be a great source of pride and honor, however it is important to understand the regulations under the U.S. Flag Code so you can display your flag respectfully. Below we will highlight some regulations for when and how you should fly Old Glory. The next time you hear someone mention “Old Glory” or the “Betsy Ross Flag,” you will know the history behind it. At Quality Sign Designer, we are proud to produce American Flags here in America. If you are looking for an American Flag or any type of signage, we have the solution for you.